Energy Markets Bitesize: Things can change on a whim

Last week’s note finished with the words “the outlook can change at a whim”, which was prophetic because since things have become more hawkish from last week’s dovish note.

Gas pricing back on the rise

Firstly, spot gas markets have been rising since about Thursday, well above their lows in mid-May as the chart below shows. 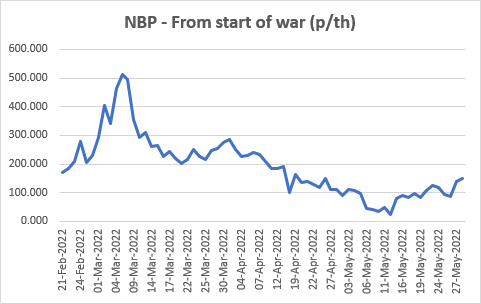 Secondly, the Ruble decree has raised its ugly head again, rather unexpectedly.  Yesterday, Gazprom announced the cessation of deliveries to the Netherlands and today announced that delivered to Orsted in Denmark and Shell Germany would cease as each party refused to comply with the Ruble payment decree.  Uniper and RWE in Germany said they did comply.  The only good news is that we are now at end May where all April gas deliveries should be settled one way or the other.

Power Pricing on the rise

Locally, power prices have risen the last week or so.  While the average price for the week is €161/mwh, the range is €130 to €258/mwh primarily from rising gas prices coupled with very low wind generation.

EU Summit concludes with an agreement on Sanctions

On the geopolitical front things have been busy with the EU leaders summit concluding on Tuesday. While the headline is agreement on a Russian oil ban, it should be noted that it will not take effect until year end and Hungary, Slovakia and the Czech rep have been carved out of the ban as they rely on piped deliveries from Russia.

We expected some news on the de-coupling power prices from gas prices from the Summit.  It appears very little occurred here except leaders asked the EU Commissions to explore options including “temporary import price caps”.  Spain and Portugal have been particularly vocal on this in recent weeks.

The Irish media is quoting Taoiseach Michael Martins comments warning of a ‘new era’ of high energy prices.  It’s nothing profound, just a comment on the reality we have been living for almost a year now.

Finally, as ever, things can change on a whim!